At today's Welsh Fencing AGM, Lyndon Martin was awarded the honour of Honorary Life Member.  Here are some of the highlights of his fencing career.

Lyndon took up fencing in the 1960s, prompted by the late Wynford Seymour, whom he met whilst working at the Port Talbot steelworks, where Wynford was a nursing officer. After fencing for some years at Swansea, Lyndon ‘moved’ to Cardiff, fencing both there, and in the old Excalibur club, in the 60s & 70s.

An able fencer, noted for his quick accurate attacks, Lyndon was soon taking part in several high profile matches. A member of the Wales epee team in their match against Denmark in Copenhagen in 1972/3, Lyndon was one of the group of Welsh fencers who regularly attended many events at home, and outside Wales, in those years. He was highly placed in the Epee Club Cup in 1978 & again in 1979, and secured 4th place in the Bristol Open of 1977/8. 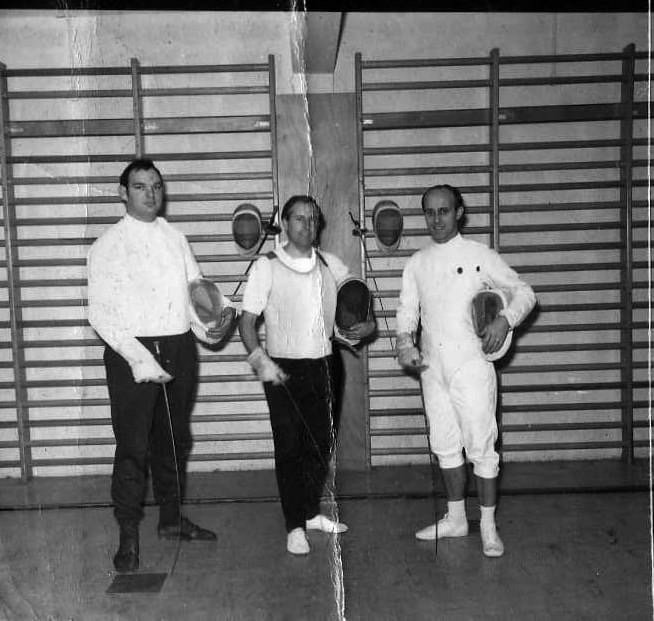 Malcolm Fare, former editor of The Sword, and founder of the National Fencing Museum, Hanley Swan, recalls meeting Lyndon, along with Bob Turner, Alf Pearce and other notables, as they searched together for accommodation in Dieppe in 1973, having overlooked the fact that this was the eve of Bastille Day, a national holiday in France - eventually securing the last bedroom in the last hotel in Dieppe on that occasion. Lyndon had success again in Dieppe, taking 3rd place in their 1978/9 epee competition.

One of the highlights of his fencing career was as a member of the successful Welsh Epee team, who secured the Silver Medal in the Commonwealth Fencing Championships in Ottawa in 1974.

More recently his main activity has been in coaching, which, as a Level 3 Coach, he does expertly & energetically at all levels. For many years this was in Cardiff FC, both in a supportive role, and also in his own right, where he successfully coached at least one former winner of the Kingston Cup and the Pearce Cup to success in both of those epee events. Since then he has been at Whitchurch FC, where he is the resident Head Coach. He also coaches regularly at Celtic Sword FC, and on occasions at Russell Swords as well.

A regular attender at WF AGMs, throughout his career Lyndon has been solidly supportive of fencing, and Welsh Fencing, thinking nothing of driving or travelling long distances to attend events far afield, either as a competitor or coach, or merely as a spectator, whether the Hereford & Worcester, or the Triangular in Largs in Ayrshire. He has consistently been an active presence at the regular coaching days & other sessions run by WF, and is well known for speaking up, in thanking the organisers of smaller events for their hard work in arranging the competition in question.

Welsh Fencing’s membership records were transferred to BFA for administrative reasons in 2005, and all fencers were allocated “BFA numbers”. Until then, our fencers had had a “WAFU number”. Lyndon was WAFU member No 4 (Gordon Kingston No 1, Alf Pearce No 5, Bob Turner No 13).

That is how long Lyndon has been fencing.