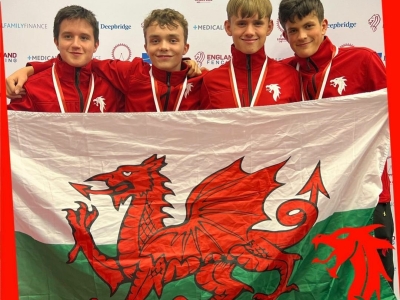 The Board are pleased to announce the Commonwealth Selection Criteria that will be applied for the Senior and Junior/Cadet Championships in 2022.  They are designed to take into account the significant disruption caused by the COVID pandemic.  If there are any questions, please raise them to the Secretary - secretary@fencing.cymru.

Welsh Fencing are pleased to announce the following team selections for the Commonwealth Fencing Championships being held in SportsDock, London in August 2022. 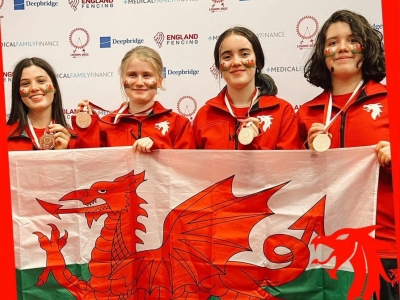 The board are pleased to announce the team that will be supporting the Welsh Team competing at the Commonwealth Championships in London later this year.

The competition this year is unique, as it comprises all four age-groups, from Cadets all the way up to Veterans competing consecutively at the same venue. 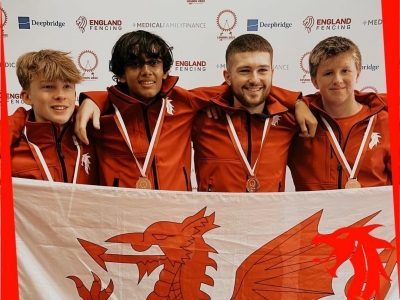 Eligibility to Fence for Wales

To be eligible to fence for a Welsh team you MUST satisfy one of the following criteria (1-3) plus satisfy criteria (4).

Welsh Fencing are pleased to announce that he following team will be competing in the Veterans Commonwealth Championships: 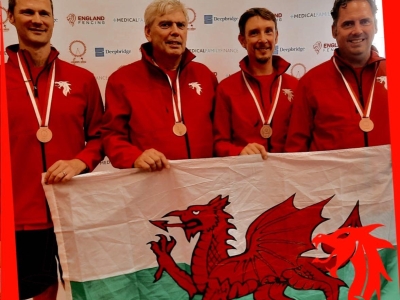 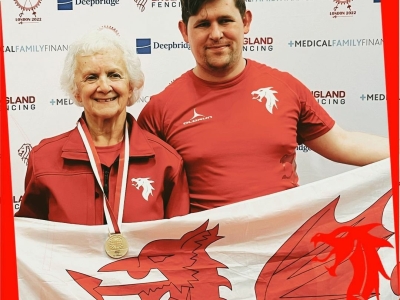 A strong cohort of the “Older, Sneakier and Wiser” veterans arrived for the final 6 days of competition, which started off with VWS and VME. 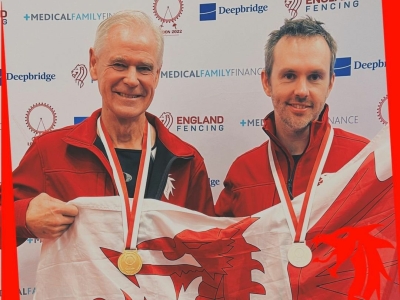 As a result of COVID, the Board are aware that fencers and the fencing calendar have been severely impacted and may continue to be for a significant period. 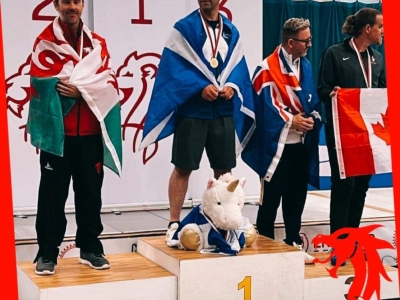 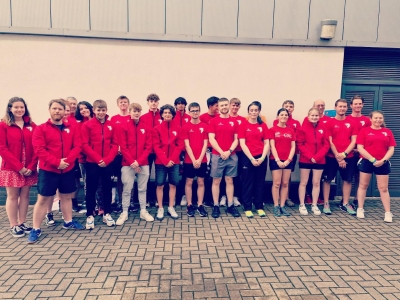 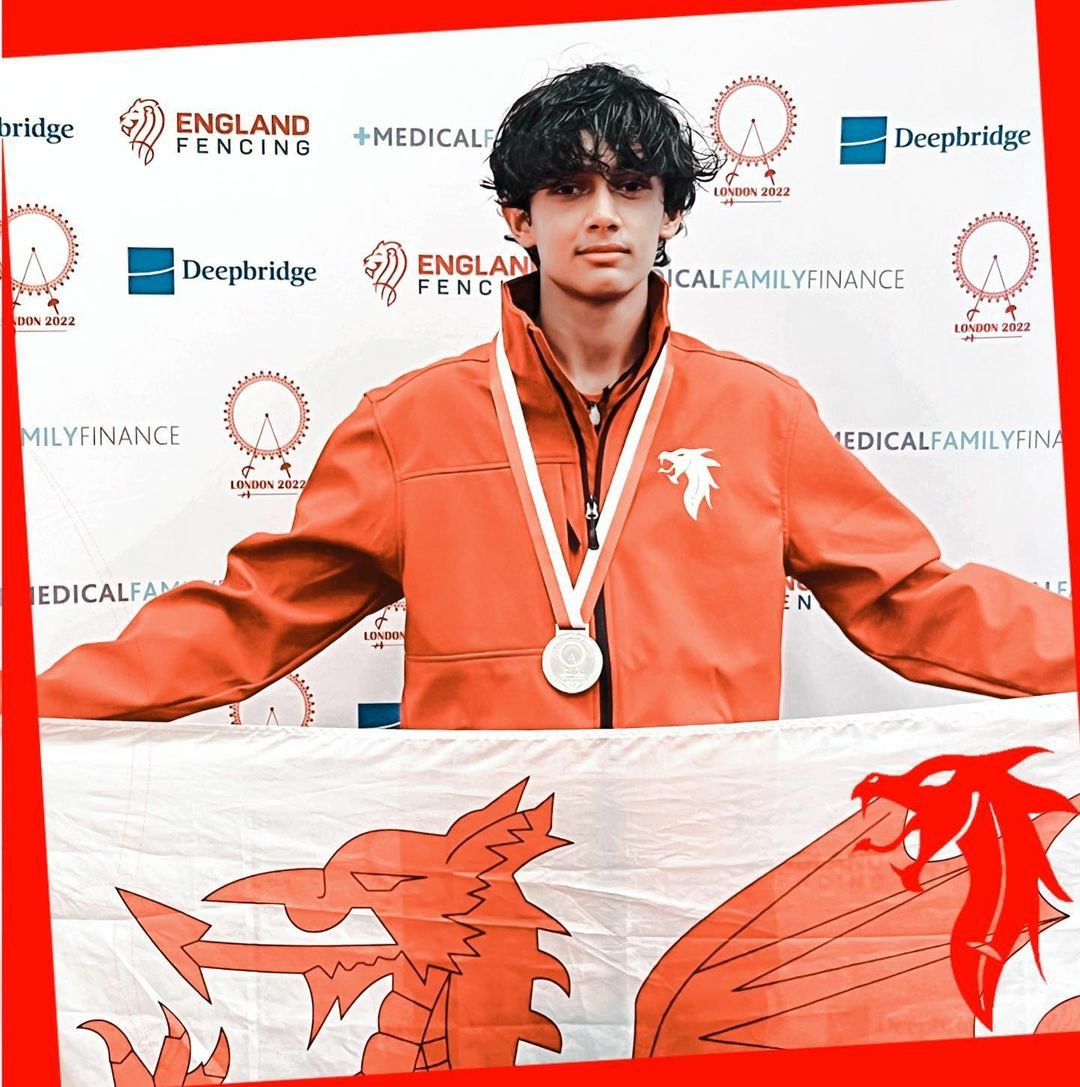 Day 9 saw the start of the cadets events, and what a start it was! After some mixed results in the poules, Sameer Sunder-Rajan knocked out the no.1 seed in the L16 and then proceeded to dispatch yet more higher ranked fencers to eventually meet the GBR no.1 in the final. This was going to be a tough ask; Sameer acquitted himself admirably and came away with a well-deserved Silver medal after losing the final 6-15. 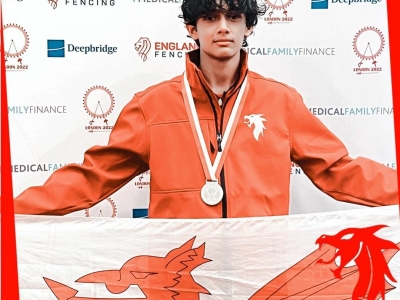 Sameer Sunder-Rajan today won the first medal for Wales in the Cadet category, with Silver in the individual epee. 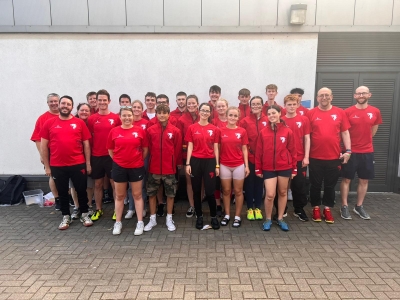 The junior fencers arrived with a palpable sense of excitement and keenness to get going. Having seen the successes of the senior fencers, they were keen to emulate their older (& wiser?) counterparts but found a number of very talented fencers from across the Commonwealth waiting for them. Bearing in mind that there were several of our cadet fencers competing an age-group up, it was very encouraging to see so many strong performances.

However, in the team events, this is where Team Wales showed what we could do……… 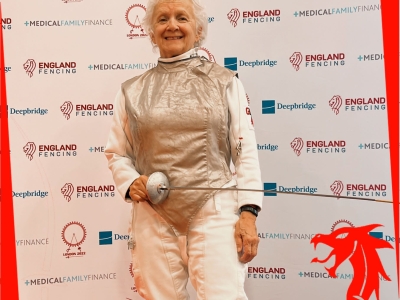 Welsh Fencing are honoured to have Margaret Myers representing Wales at the Commonwealth Championships in the Veterans Women’s foil today.

Maggie started fencing in 1966 under Peter Stewart at Cardiff Fencing club. A numerous Welsh champion in women’s foil, Maggie has represented Wales a number of times and was a member of the then WAFU Board in the 1970s & 1980s. This is Maggie’s 6th Commonwealth Championships having represented Wales in 4 Senior and 2 Veteran events. She is also a regular at Welsh Fencing Champion events in veterans and seniors and regularly competes on Welsh teams.

Maggie is currently also the Welsh Veterans foil selector. At the age of 74, Maggie is still competing for GB, winning a Team silver at Hamburg World Cup and is looking forward to the Veterans World Championships in October. Welsh Fencing would like to congratulate and thank Maggie for her 54 years dedicated to fencing, and to Wales. 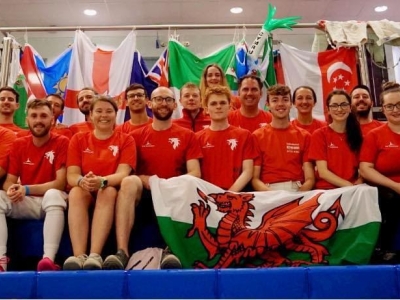 The highlights started right from the off, with a deserved L8 result for Marc Burkhalter and strong results from the rest of the SME team. 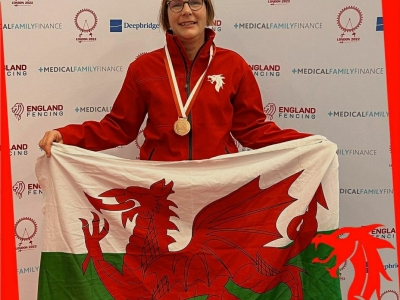 Ruth Silverstone today won the first medal for Wales in the Veteran catgeory, with Bronze in the individual epee.

Her semi-final opponent was Karen Laansoo (CAN), who defeated Ruth 10:9. 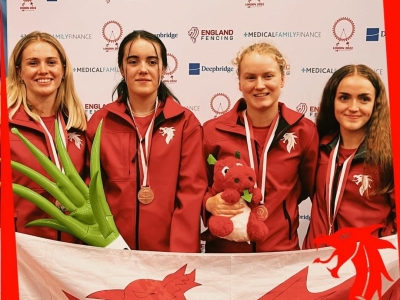 Seeded 5, Wales defeated Sctoland in the L8, winning 45:41.  This took them into the L4, and gauranteed them a medal.  The opponents in the L4 were top seeds, England who took the Gold medal 45:25. 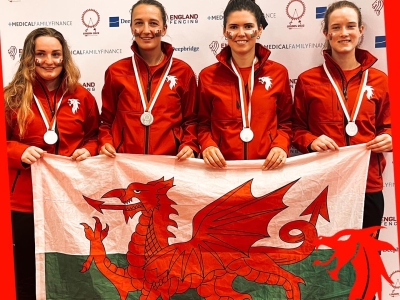 On the last day of the Senior Commonwealth Championships, the Wales team won yet another Commonwealth Medal. This times it was Silver, to the Women's Epee Team of Lou Sadler, Jess Gundry, Rebecca Renziehausen and Emily Southern.

Seeded 4, Wales had a bye into the L8, where they met the number 5 seeds, New Zealand.  This took them into the L4, and gauranteed them a medal.  The opponents in the L4 were top seeds, England.  In a tight match, Wales were victorious 38:36.

In the final, the Wales team met Canada, who took the Gold medal 44:36.

Welsh Fencing are pleased to confirm the following team for the Senior Commonwealth Championships 2018. 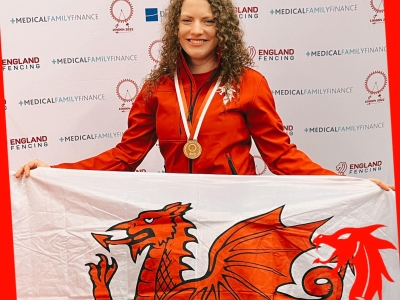 Congratulations to Gemma Collis who today won Gold at the Senior Commonwealth Championships, in the Wheelchair Women's Foil, Category A.

Following completion of the appeals process, Welsh Fencing are pleased to announce the following team for the Cadet and Junior Commonwealths 2018. 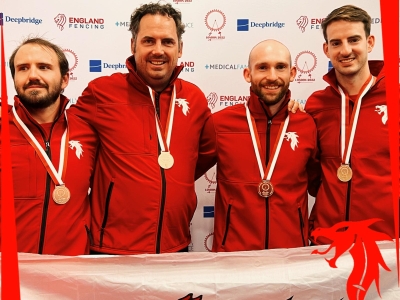 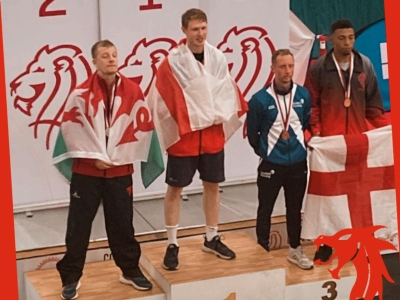 In the other half of the draw a tight all-English semi-final saw Harry BIRD defeat Kamal MINOTT 15:14.

The final was a very tight fight, with the lead changing hands regularly, but with Harry eventually coming out as victor, 15:14.

Well done, Glen.  Wales is proud of you!