The junior fencers arrived with a palpable sense of excitement and keenness to get going. Having seen the successes of the senior fencers, they were keen to emulate their older (& wiser?) counterparts but found a number of very talented fencers from across the Commonwealth waiting for them. Bearing in mind that there were several of our cadet fencers competing an age-group up, it was very encouraging to see so many strong performances.

However, in the team events, this is where Team Wales showed what we could do………

In JME, the boys overcame a strong India team by the closest of margins 44-43 with Will Ferguson dominating the opposition, and Rhys Jackson and Casey Jones delivering strong performances. This led to a L8 bout against England, which was against a strong team comprising 3 of the 4 GBR fencers selected for the Junior World Championships. After a strong Welsh start, the England team led throughout the rest of the event, but the team stuck to their task and fought to the last, eventually going down 31-45 in a performance to be proud of.

Now, what do you get if you cross a junior sabreur, a cadet sabreur, a junior foilists and a cadet epeeist?........Well the answer is, of course, a junior women’s sabre team! In a blatant display of fantastic teamwork and camaraderie, Amelie Russell and Rhiannon Craig joined Erin Corcoran and Georgia Howes in JWS team that did themselves and Wales proud. Egged on by yet again a loud and supportive Welsh crowd, the girls put in a battling performance against the ultimate Bronze medallists and should be rightfully proud of their result!

The JMF team reached the L8 by convincingly defeating the N Ireland team 45-28, with each team member making significant contributions to the result. This led to the hardest of draws vs Scotland, comprising half of the GBR team at the Junior/Cadet World Championships. James Kloss, Callum Evans, Nicholas Williams and Tom Behrens fought long and hard, pushing the Scots all the way, but eventually losing 32-45 to the eventual winners.

Thanks to the performances in the induvial event, the JMS team had a bye to the L8 where they met Scotland. Dylan Galazka, Felix Groves, Seb Evans-Reeves and Bobby Childs delivered strong performances leading to the lead changing several times, but a strong Scotland team ultimately proved too strong  for our boys, eventually going down 37-45. 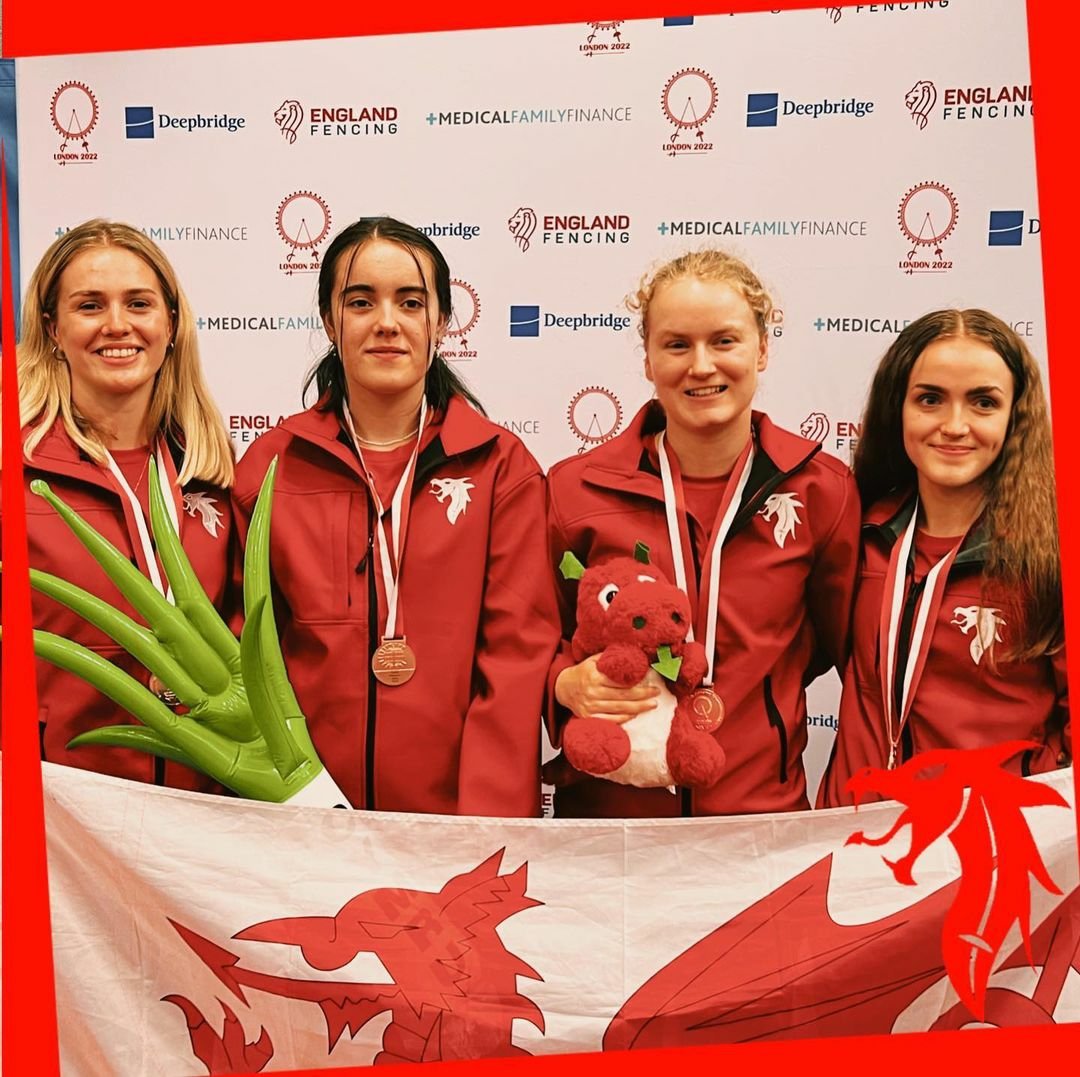 The JWE team met a Scotland team in the L8 which included a Bronze medallist in the individual competition. This was always going to be a tough ask, but the girls responded magnificently. Louise Cattanach started things off, fencing intelligently to limit the impact of the Scot’s strongest fencer. Amelie Russell, Dana Fielding and Lulu Willett then combined to limit the Scot’s scoring when required and at the right time, attacking to build a lead to defend into the last round. Leading 40-33, Amelie Russell secured the 5 hits required, finishing 45-41 and guaranteeing a Bronze medal.

The semi final proved a step to far against a very strong England team comprising half of the GBR team at the recent Junior World Championships. Solid scores across the team led to a performance the girls can be proud of, eventually losing 25-45, and a Bronze medal to be collected.